The presence of LGBT lawyers continues to be highest among associates, at 4.14% (see Table 1). LGBT associates are also better represented at large law firms — with firms of more than 701 lawyers reporting 4.45% of their associates as LGBT. Conversely, small firms of 100 or fewer lawyers reported the highest percentage of LGBT partners in 2019, at 2.42%. In 2018, firms with more than 701 lawyers had the highest percentage of LGBT partners; however, their percentages declined from 2.33% in 2018 to 2.19% in 2019.

Perhaps not surprisingly, there are wide geographic disparities in these numbers, and in 2019, as in recent years prior, more than half (53%) of the reported LGBT lawyers are accounted for by just four cities: New York City, Washington, DC, Los Angeles, and San Francisco. These same four cities comprised roughly 38% of the approximately 101,000 lawyers included in these analyses. Thus, the percentage of LGBT lawyers in these cities is correspondingly higher — 4.2% overall (and highest in San Francisco specifically at 5.9%) — compared with the 2.99% nationwide figure. In these same four cities, the percentage of LGBT summer associates is also higher — about 8.5% compared with 6.86% nationwide.

Nationwide, the percentage of LGBT lawyers has generally been trending upward over the 18-year period in which NALP has been compiling these figures as seen in Chart 1. While growth has been slow and steady for partners, the share of LGBT summer associates has increased much more dramatically during this period, rising from just 0.61% in 2004 to 6.86% in 2019. With the percentage of LGBT summer associates in 2019 over 2.7 percentage points higher than that of associates, there is potential for some continued growth in the presence of LGBT associates at these firms.

Although the overall figure for summer associates in 2019 was 6.86%, there is considerable variability by firm size, ranging from 3.55% in firms of 100 or fewer lawyers to 8.09% in firms of 501-700 lawyers. This is also consistent with Class of 2018 findings that lesbian, gay, and bisexual graduates going into private practice were more likely to take a job in a firm of more than 251 lawyers than were graduates taking jobs in private practice as a whole.

Full details on LGBT lawyers in prior years can be found in previous NALP Bulletin columns at www.nalp.org/lgbtq_lawyers and in NALP's 2019 Report on Diversity in U.S. Law Firms at www.nalp.org/reportondiversity. 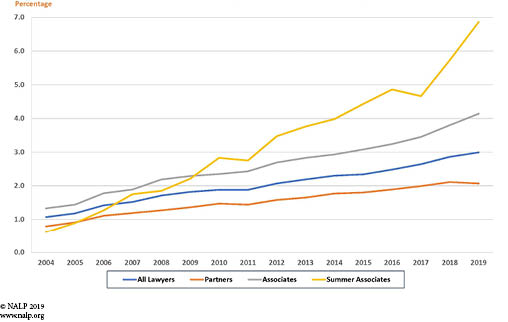 Note: All figures were compiled from the NALP Directory of Legal Employers for the year specified.

Table 1. Reporting of LGBT Lawyers in the NALP Directory of Legal Employers — 2019

Note: Figures were first reported out in a full table starting in 2004. All figures were compiled from the NALP Directory of Legal Employers for the year specified.