The rate of employment in jobs requiring bar passage also increased for the fifth year in a row, from 71.8% to 72.8% of graduates for whom employment status was known, but remained below pre-recession levels. This percentage is up more than 8 percentage points since bottoming out in 2012 and 2013 at 64.4%. Despite the improvements in the employment rate, the total number of jobs found by graduates was down about 150 jobs compared with 2017. However, since the number of graduates was also down by about 700 according to the ABA, the employment rate increased even with a decline in the total number of jobs.

Nearly 55% (54.8%) of employed graduates obtained a job in private practice. This figure had sunk to a low of 49.5% in 2011 and has finally climbed back near the prevailing levels of 55-64% of jobs observed for the 25 years prior to the recession. (See Chart 1. Percentage of Jobs in Law Firms, Classes of 1985-2018 to further explore these employment trends.) However, while the percentage of jobs in private practice has increased for the last four years, the total number of law firm jobs had been declining since 2014. This downward trend reversed with the Class of 2018, with its graduates obtaining a modest 21 additional law firm jobs (a 0.1% increase) compared to the Class of 2017, bolstered by the growth in the number of jobs in the largest firms.

As shown in Table 2. Law Firm Jobs by Firm Size — Classes of 1985-2018, the distribution of law firm jobs by firm size has changed over the years. For many years, jobs in firms of 1-10 lawyers outnumbered those in firms of more than 100 lawyers. In 1998, the pattern reversed, and up until the Class of 2010 the number of jobs taken in firms of more than 100 lawyers outnumbered those taken in firms of 1-10 lawyers. (The 1-10 category includes graduates who are working for a solo practitioner.) Starting with the Class of 2010 there was a sharp reversal, with jobs in small firms outnumbering those in firms of more than 100 lawyers for the first time since 1997. The difference grew wider with the Class of 2011 but has shrunk since then as large firm hiring rebounded somewhat. By 2016 the two categories accounted for close to equal percentages. However, 2017 marked another fairly large shift, as the percentage of jobs in the smallest and largest firms approached their 2009 levels, and this trend continued with the Class of 2018. It remains the case, however, that the proportion of jobs in either very small or large firms has accounted for at least 70% of law firm jobs since 2000. Finally, the percentage of law firm jobs reported as solo practice, that is graduates who started their own solo practice after law school, has decreased considerably since 2011, and the percentage for the Class of 2018 (2.0%) is the lowest on record. (Note that the firm size "101 or more" is used in this table so as to provide figures going back to 1985.) 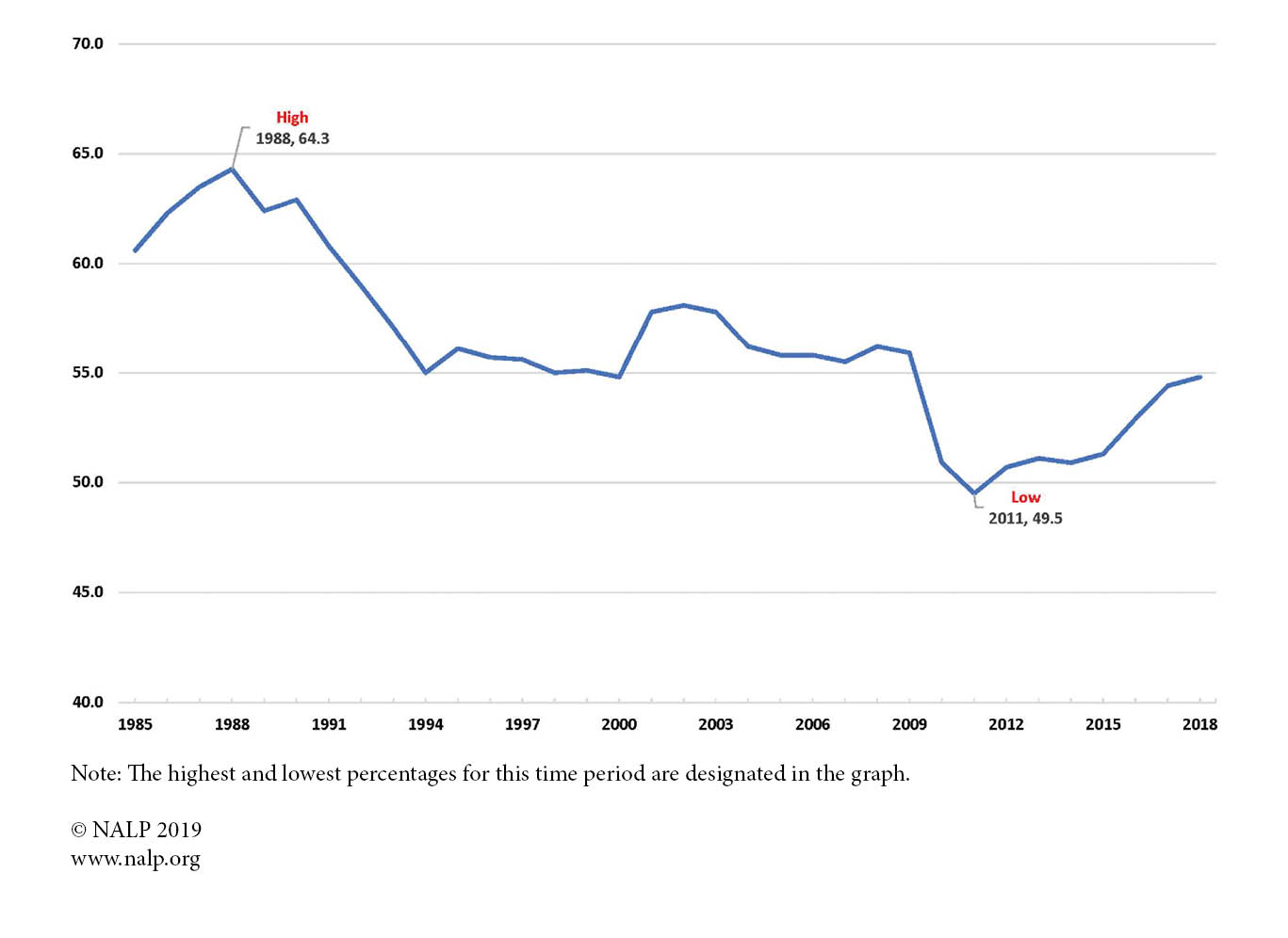 Note: Overall employment rates for 1990-1998 are based on all graduates for whom employment status was known, excluding a small number known to be employed but for whom basic job type was not known. Overall rates for all other years include such graduates, and thus may not necessarily be obtained by adding up figures for individual job types. Also, in 1985 and 1986, multiple jobs held by one person were reported separately; hence legal and other employment percentages for these years reflect positions taken rather than individuals and cannot be added to obtain the overall employment rate. The percentage not working includes graduates seeking employment as well as those neither working in any capacity nor actively seeking a job. Starting in 2011, the figure includes graduates who had accepted an offer of employment but had not started the job as of February 15 (class years 2011-2013) and March 15 (class years since 2014). New job classifications effective with the Class of 2001 preclude direct comparisons of job types with prior years.

Note: Figures for 1989 and 1990 reflect only full-time law firm jobs; for all other years, figures reflect all law firm jobs acquired by graduates. Figures in this table differ slightly from those published in national reports (Employment Report & Salary Survey/Jobs & JDs) because law firm jobs for which firm size was not reported are excluded from the base.