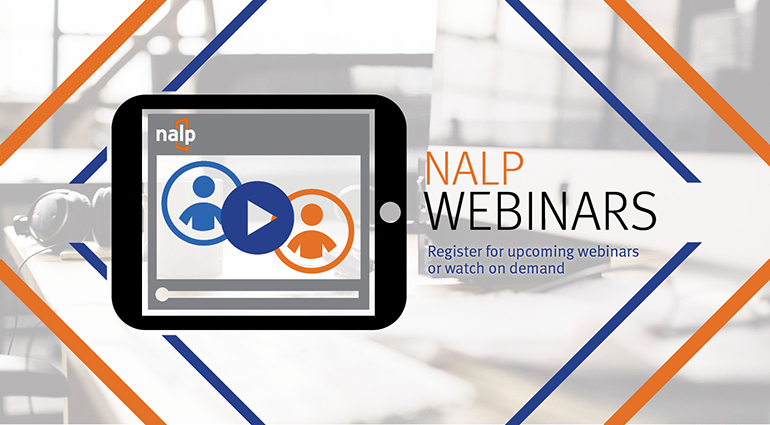 Free Webinars — Open to All

Your Thrive Mindset
Presented May 20, 2020 by Ann Gomez

Transgender and Nonbinary Inclusion for Legal Professionals Webinar
Presented May 13, 2020 by Dru Levasseur

The Upside of Trust and Civility in the Workplace
Presented by Marla Warner on April 14, 2020

Become a Virtual Meeting Virtuoso
Presented May 14, 2020 by Christine Clapp

Take Charge of Change Before It Takes Charge of You
Presented October 31, 2019 by Rebecca Baumgartner and Kristine McKinney

Law School and Career Aspirations of 1Ls — Highlights from Before the JD
Presented August 21, 2019 by Jeff Allum and Katie Kempner

Law School Alumni Employment and Satisfaction for the Class of 2014
Presented August 23, 2018

NALP Employment and Salary Data Collection for the Class of 2017 Webinar
Presented November 13, 2017 by James Leipold and Judith Collins

So You Need to Make a Presentation?
Presented November 8, 2017 by Rachael Bosch

Employment Outcomes for the Class of 2016
Presented August 1, 2017 by James Leipold

Employment Outcomes for the Class of 2014
Presented July 29, 2015 by James Leipold and Judith Collins

The Art of Speaking with Confidence
Presented February 22, 2013 by Christine Clapp

The Basics of NALPconnect Webinar
Presented May 2, 2012 by Lisa Quirk

What Does It Take to be a Great Leader? Essential Leadership Skills to Guide You Through the Storm and Beyond
Presented January 22, 2010 LeaNora Ruffin, Michael Gotham, and Heather Jarvis

The Bar Exam — Ensuring Success for Your Associates
Presented November 13, 2019

Self-Doubt & Imposter Syndrome: Why They Hit the Legal Profession Hard and How to Hit Back Webinar
Presented March 28, 2018 by Neha Sampat

Project Management Training for Under $500
Presented September 22, 2015 by Andy Hales

Alumni Programs 101: How to Create an Alumni Program at Your Law Firm
Presented on May 1, 2012 by Carol Sprague and Amy Hancock

Budgeting and Financial Savvy for the PD Professional
Presented on November 3, 2011 by Kay Nash, J.D. Neary, and Colleen O'Hara

Diversity Fellowships — Why They Work and How to Utilize Them
Presented December 10, 2019

Strengthening Your Community — How to Build and Integrate a Successful Flex Affinity Group
Presented October 6, 2015

Promoting Inclusion and Diversity within Your Workplace
Presented November 20, 2014

Increasing the Return on Investment: A Strategic Approach to Affinity Groups
Presented June 27, 2011 by Jane Pigott and Karen Kahn

Best Practices for High Volume Recruiting in viRecruit Software
Presented May 11, 2017 by Andrew Talpash, President and CEO of vi

Best Practices for Lateral Recruiting in viRecruit Software
Presented May 4, 2017 by Andrew Talpash, President and CEO of vi

Making the Most of OCI
Presented April 26, 2016 by Amy Perez and Anna Whitener

The ABC's of Lateral Hiring
Presented October 28, 2015 by Lynne Traverse

A “Roadmap” to a Successful Summer
Presented January 21, 2015

An Update on the ABA Employment Protocols
Presented November 5, 2018

When First Gen Meets iGen: What to Expect and How to Get Through
Presented September 27, 2018

The “Ins and Outs” of the Suitability and Security Review Processes in Government Hiring
Presented July 24, 2013

To Renege or Not to Renege — That Is NOT the Question
Presented February 19, 2013 by Jill Backer and Tamara Stephen

You Had Me at “I Want to be a Sports Agent”: Counseling for Sports and Entertainment Law Careers
Presented on December 7, 2011 by Yvonne Denenny, Amanda DiPolvere, Lorri Olan, and Michael Sorrell

Use of Social Media in Partner Recruiting Webinar
Presented October 17, 2018 by Amy Knapp

It Started With a Click — Connecting with LinkedIn, NALPconnect, and Other Social Media Webinar
Presented February 12, 2013 by Nicole Oddo

Maximizing the Impact of Social Media at Your Law School
Presented June 26, 2012 by Shawn McKenna and Linda Wendling

Jobs & JDs: Employment and Salaries of New Graduates, Class of 2018