In May 2020, NALP began administering a series of short "pulse" surveys to learn more about the impacts of recent events on U.S. legal employers and law schools. These surveys were designed to quantify the rapidly evolving changes occurring in the industry. While the first two rounds of surveys focused on items related to the COVID-19 pandemic, the final set of surveys — conducted in late July through early August 2020 — was centered on racial justice and diversity, equity, and inclusion (DEI) initiatives at U.S. law schools and legal employers, and in particular, changes that have occurred due to the events that have transpired since the murder of George Floyd on May 25. This article will highlight some of the key findings from this final series of pulse surveys.

The law school survey also included two open-response items in which schools were asked to provide details on what their Career Services Office (CSO) — either as a department or in coordination with other groups — was doing to support students of color, and Black students specifically. Common themes included: individual student outreach, addressing student mental health and well-being, supporting and attending affinity group meetings, hosting anti-bias and DEI programming, employer outreach and training, updating employer policies and procedures, creating a new CSO DEI staff position or incorporating DEI responsibilities into an existing CSO staff position, ensuring that Black voices are represented in CSO programming, and re-evaluating all programming and resources to ensure inclusivity. A few selected responses are below:

"We are continuing the efforts that we began last year around focusing on enhancing supporting students through programs relating to student programs and services, staff professional development, and relationship building. This includes the following: 1) offered program for diversity fellowships and enhanced access to resources regarding these opportunities; 2) offered programming for diverse students relating to navigating the clerkship process, and judicial careers for lawyers of color, surveyed alumni clerks to establish mentoring contacts for clerking; 3) supported/attended affinity group meetings regarding careers, as well as affinity group conference career fairs; 4) staff development; 5) designated a member of the team as the liaison/champion for Diversity and Inclusion; 6) attended professional development programs; 7) engaged a consultant who conducted implicit bias training with our team; and 8) multiple meetings with affinity group leaders to hear how we can address their needs and took that feedback to develop these responses."

"We have prioritized highlighting Black voices and the BIPOC experience in the profession and in America in our weekly Career Center newsletters. We do this primarily through linking to articles, professional development events, and other resources for students and alumni. Our team has also worked with affinity bar leaders and the state bar to cultivate a mentor list for diverse students. It includes diverse lawyers and judges from around the state."

"CSO staff are required to attend all NALP diversity town halls and webinars and were required to complete implicit bias training. We are increasing our programming to encourage students of color to consider certain career paths."

"We have engaged with employers in our outreach and in response to employer questions about how to create better diversity pipelines to their firms and how to provide better experiences for diverse law students in their firms."

"Team members are engaging in training/educational opportunities specific to anti-Black racism. We are also working to identify and share additional opportunities for our students to engage in pro bono and other activities that address anti-Black racism. Our law school has also created (and the CSO has contributed to) a webpage devoted to racial justice resources for students."

Table 1: Percentage of Offices* that Planned New Anti-Racism and/or DEI Training for their Summer 2020 Associates

*Of offices hosting a 2020 summer program

Note: The total number of offices reported reflects all offices with 2020 summer programs that responded to the survey question, including both those that did and did not plan new training.

Table 2: Percentage of Offices that Designated Juneteenth a Paid Holiday in 2020 and Beyond

Chart 1: Percentage of Law Schools with a Formal Complaint Procedure for Students Experiencing Bias in the Recruiting/Interviewing Process by Region and Enrollment Size 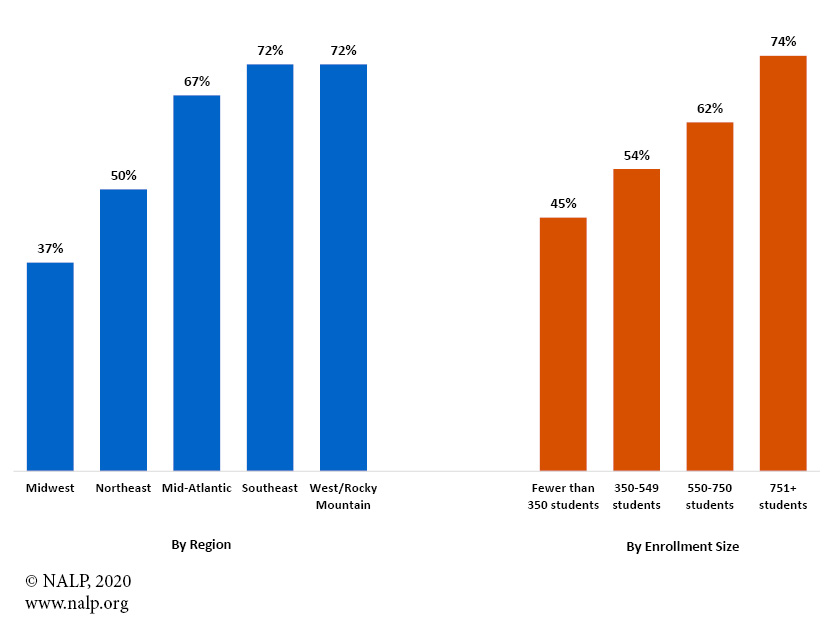