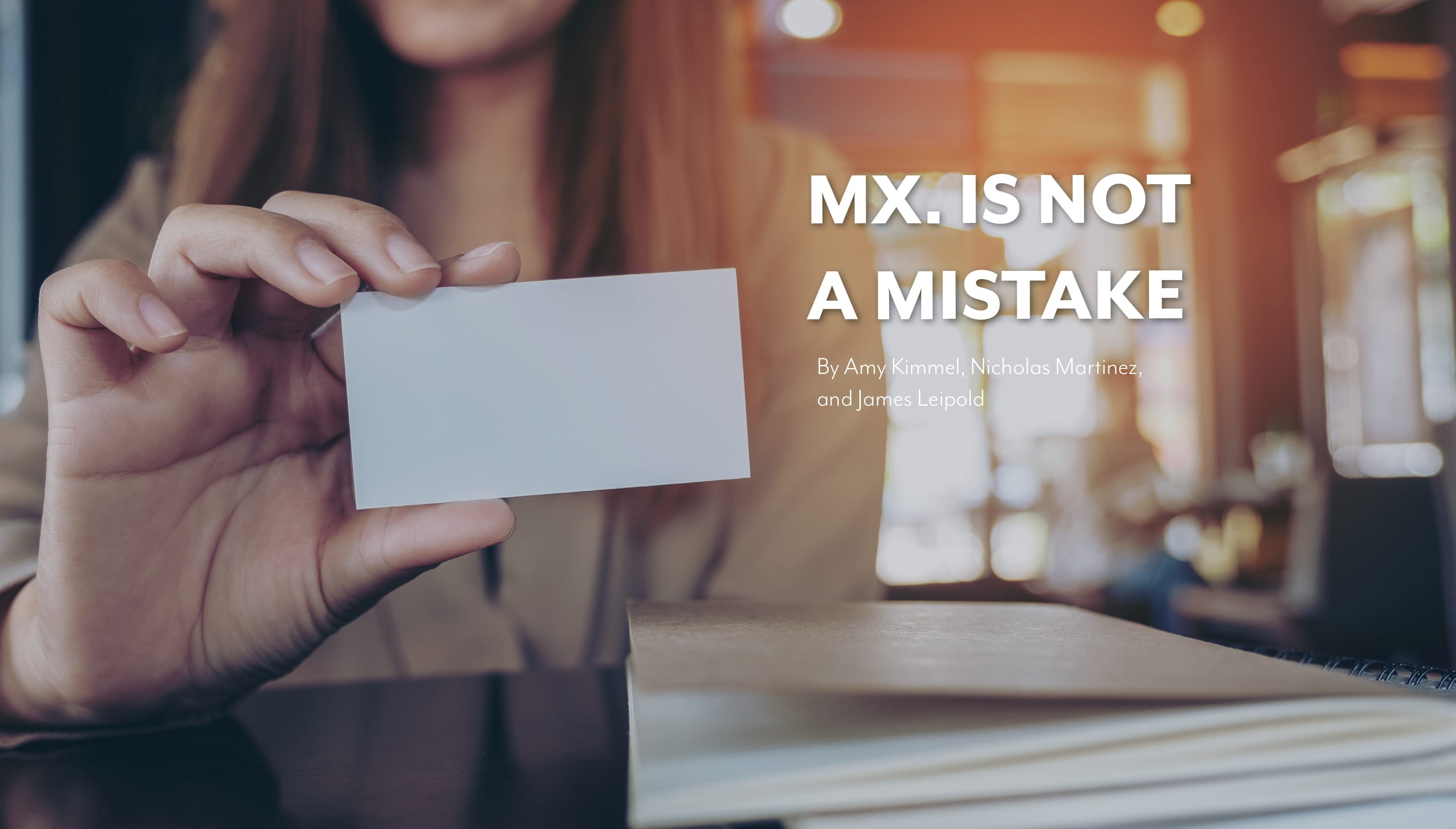 The oldest members of Generation Z are 24 years old and are beginning to make up a majority of our new law students. They are the most racially and ethnically diverse generation yet. Gallup research tells us that one in six Gen Z adults self-identify as LGBT, and Pew Research Center surveys tell us that 35% of Gen Z say they personally know someone who uses gender-neutral pronouns like “they” and “them.” (See Resources: Research.) As a group, they surpass millennials in their familiarity with non-binary gender identity and their support for transgender acceptance. That means that, ready or not, you’re going to see some cover letters that look different than the ones you’ve been used to seeing.

Specifically, in addition to emails with signature blocks that identify a job candidate’s pronouns as they/them/theirs, you’re going to see some cover letters that use the honorific Mx.

“I don’t want to offend anyone so using Mx. is being empathetic and respectful.”

Merriam-Webster describes Mx. as a “gender-neutral title of courtesy.” The title is used by people who want to use a gender-neutral title or who do not want their gender revealed in their title. It is also used by people who identify as gender non-binary. (Authors’ note: This article is focused on exploring using Mx.as an honorific for employers in the recruiting process. It is not focused on individuals who use Mx. as an honorific themselves and best practices for supporting students, candidates and employees who use Mx. There is not consensus on whether the term is appropriate to use as a gender-inclusive catch-all or if it should be used only as an exclusive non-binary honorific.)

It is pronounced “mix” or “mucks.” Starting in the 1970s, it has been used sporadically as a gender-neutral title (see Resources: Title). Mx. was added to the Oxford English Dictionary (and others) in the 2010s. It is not the first time that honorifics have been expanded to meet changing social norms. Remember when Ms. was a big deal? The language changed to reflect the fact that many women did not want their honorific to be tied to their marital status.

How Is It Used?

Why Is It Used?

Perhaps the bigger question for many employers is why? Why are applicants using this honorific especially if the addressee isn’t non-binary? It’s a simple matter of respect.

Some perspective from a current law student:

“I use Mx. to show respect without assuming someone’s gender. I think it’s a simple way to show you are cognizant of the fact that some people don’t identify with the traditional he/she pronouns. For individuals that don’t use traditional pronouns, it’s a respectful way to start a formal letter, and for individuals who have gender-neutral names, it’s a safer way of not making assumptions about the person’s gender.”

This perspective is not unique and tracks with what we know about Gen Z. Almost 60% of Gen Z members say they want forms or online profiles to include gender options beyond man and woman (see Resources: Options). This is consistent with Gen Z’s view of themselves as thoughtful, open minded, and compassionate (see Resources: Gen Z).

Many people have names that do not fit into obvious traditional norms of gender. And thankfully, our profession is getting more and more diverse, and everyone doesn’t share the same cultural background to know the gender traditionally associated with a particular name. When an applicant hasn’t met the addressee or seen their email signature block with pronouns (or LinkedIn profile, etc.), the default to Mx. is a sign of respect and not a mistake. However, as a counseling matter for students, if a recruiter has been more public with their pronouns through their email signature block or other online presence, then using Mx. is a mistake.

What Can Employers Do?

What Can Schools Do?

Above all else, remember that in the absence of information, Mx. is not a mistake. While perhaps jarring initially, with deliberate work and intentionality it will become familiar to you and the lawyers and law students you work with over time.

Amy Kimmel is Assistant Dean for the Career Development Office at the University of California Hastings College of Law.

Nicholas Martinez is the Treasurer of the Denver Area Legal Recruiting Association in Denver, CO.