Lateral hiring volume decreased sizably during the recession in 2008 and 2009, and then experienced a substantial rebound as the legal economy recovered in 2010 and 2011. In the eight years since that recovery, changes have fluctuated from double-digit losses to double-digit growth. In 2019, aggregate lateral hiring was relatively stable, down by just 0.7 percent compared to 2018. This follows an aggregate increase of more than 14% from 2017 to 2018. While overall lateral hiring declined ever so slightly in 2019, partner lateral hires were up 1.4 percent over 2018. However, decreases in lateral associate and other lawyer hiring, down 0.9 percent and 2.7 percent, respectively, drove the overall decline.

Overall, lateral hiring averaged 16.4 lateral hires per office/firm in 2019, down just a bit from 16.5 in 2018; however, the median number of lateral hires increased to eight in 2019 compared to seven in 2018. Nearly 46% of offices/firms reported an overall increase in lateral hiring in 2019. Volumes and per office figures varied greatly by firm size and geography, with the highest figures recorded, perhaps not surprisingly, in New York City, where the average was almost 20 and the median number of 16 was twice that of the national median. In contrast, offices in San Diego reported the lowest lateral hiring figures, with an average of just above four. These are the overall findings about lateral hiring from NALP's "Survey of Legal Employers on 2019 Recruiting," which requested information from law firms on lateral hiring in both 2018 and 2019.

The results shown in Table 1 and Table 2 are based on data from 459 law offices that reported at least one lateral hire in either 2018 or 2019. Table 1 reports aggregate information for partners, associates, and all other lateral lawyers. Table 2 shows lateral partner and associate hiring, which accounted for 83% of the lateral hiring reported for 2019, and includes cities and states with at least five offices reporting office-specific information and collectively reporting at least 25 lateral hires in 2019.

Source: NALP Survey of Legal Employers on 2019 Recruiting.
This table includes offices/firms which reported at least one lateral hire in 2018 or 2019 and which also reported complete information for both years. Collectively these 459 employers reported 7,537 lateral hires in 2019. Cities shown had at least 5 offices/firms collectively reporting at least 25 lateral hires in 2019. Following the overall total shown in the first line, the table separates out surveys which reported information firm-wide, or for multiple offices, from those which reported office-specific information. Firm-wide information by region includes firms whose offices are predominantly or wholly in that region. However, office-specific information includes some instances of firms with most attorneys located in that city or whose additional offices are located primarily in adjacent areas, and of multi-office nationwide firms consolidating two geographically adjacent offices onto one survey. 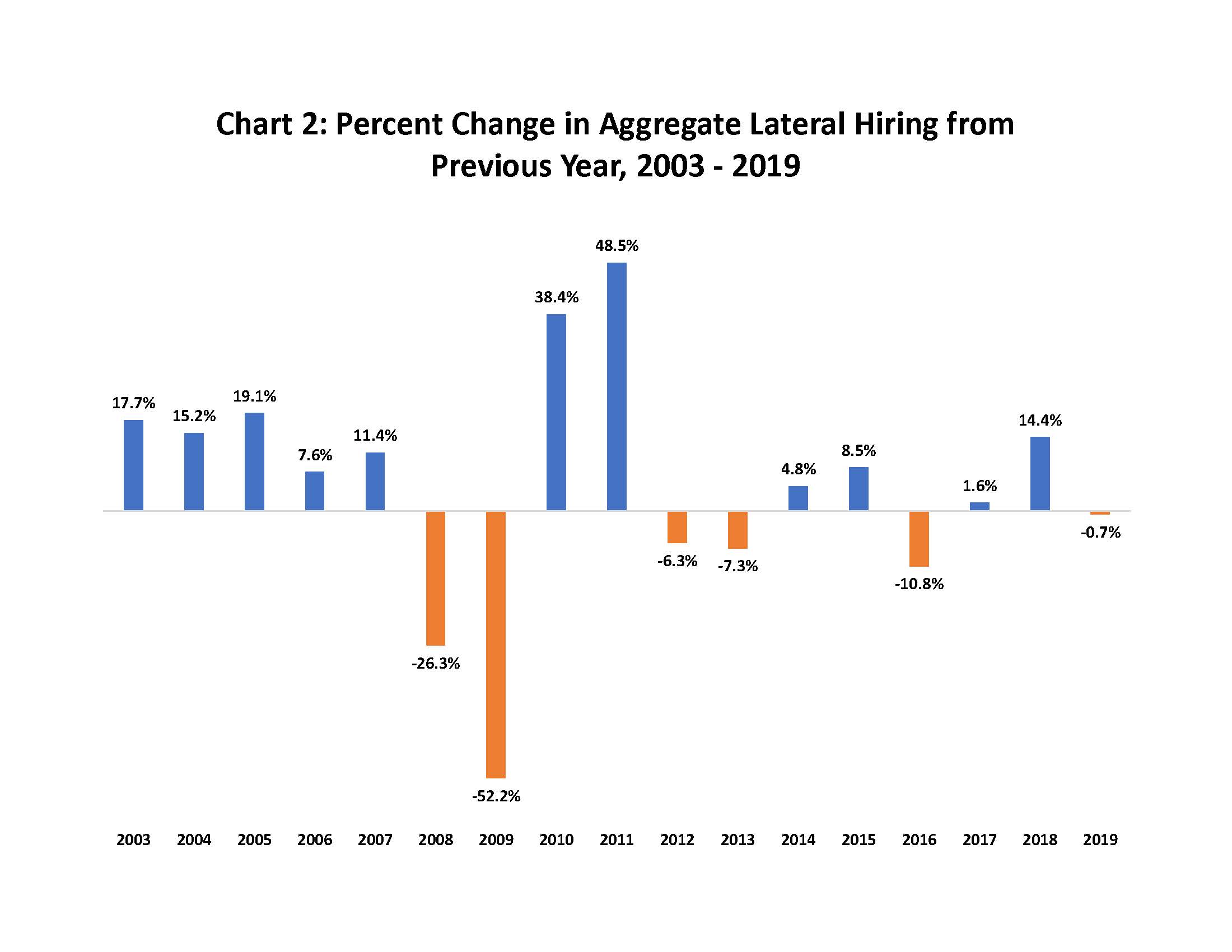