The bimodal distribution of salaries for jobs taken by new law school graduates shows quite clearly that the highest salaries are not the norm. At the time the Class of 2014 graduated, the typical high end of law firm salaries was $160,000, yet this salary accounts for less than one-fifth of salaries reported for full-time jobs lasting at least a year taken by the Class of 2014, while salaries in the $40,000-$65,000 range account for about half the salaries. Nonetheless, $160,000 remains the single most frequently reported salary.

The bimodal nature of the curve has been traced back to 2000, when many large firms upped their starting salary to $125,000. But the national curve does not mean that a similar curve is in place when looking at distributions at the state level. In fact, the height of the right-hand peak in New York State is almost three times that of the national figure, while in Florida there is no right-hand peak, and the shape of the curve resembles a more classic bell curve, albeit a lop-sided one, and about 70% of salaries are in the $40,000-$65,000 range. The chart accompanying this article shows the salary distribution for the five states and Washington, DC that provided the most jobs to the Class of 2014.

Of course, the curves reflect the employment profiles of those areas and the size of the law firms where graduates take jobs. Private practice accounts for over half of the jobs taken in the five states, but not in Washington, DC. However, what Washington, DC lacks in the proportion of law firm jobs, it makes up for by having the most firm jobs in large firms, pushing the percentage of jobs at the $160,000 level to 38% of full-time long-term jobs for which a salary was reported. In contrast, Florida offers many law firm jobs, but less than 10% are in the largest firms, nor are the large firms there paying top-dollar salaries.

The national bimodal curve seems to be rather firmly set in place even if the exact locations of the highest peak change. (Recent reports suggest, for example, that when data for the Class of 2016 is compiled, the peak is likely to move to $180,000.) At the same time, the general contrasts at the subnational level are likely to remain as well, reflecting underlying and long-standing contrasts in employment patterns.

Percentages are based on salaries reported for full-time jobs lasting at least a year. 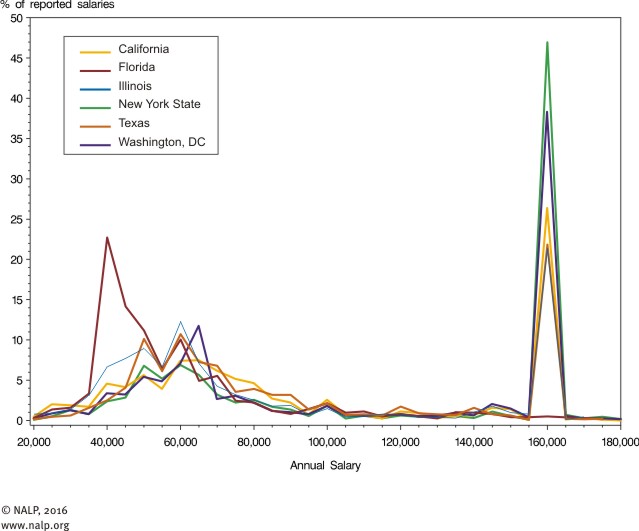