The COVID-19 pandemic produced a slightly weakened job market for the Class of 2020, a class that graduated in the early months of the pandemic and faced numerous obstacles in their job search, including delayed and — in many cases, online — bar exams, and shutdowns to parts of the economy. A year later, as the U.S. economy recovered from those pandemic-related disruptions, the employment outcomes for the Class of 2021 are some of the strongest ever recorded based on recent findings from NALP's annual Employment Report and Salary Survey.

Beyond the improvement in the overall employment rate, another historic high obtained by the Class of 2021 was the percentage of graduates taking jobs for which bar passage is required or anticipated. This percentage grew by 3.6 percentage points from 74.6% to 78.2% for the Class of 2021 — reaching a new all-time high for the period since 2001 when NALP began using the current job classifications. Despite a one-year dip in this percentage for the Class of 2020, overall, the percentage of jobs for which bar passage is required or anticipated has increased by nearly 14 percentage points since reaching its lowest level of 64.4% in 2012 and 2013. This year marked the first time since 2013 that the total number of jobs increased, growing by nearly 2,400 jobs compared to the Class of 2020. This increase can be attributed to both the higher employment rate, as well as a Class of 2021 that was about 1,300 graduates larger than the previous class.

Overall, 57.0% of employed graduates obtained a job in private practice, the highest this percentage has been since 2003. The share of employed graduates in law firm jobs had sunk to a low of 49.5% in 2011 but has steadily risen since then — except for one setback in 2014 — and for the Classes of 2019-2021 has finally returned to within the 55-58% prevailing range observed from 1993-2009. (The last time private practice employment rates went over 58% was all the way back in 1992 — in the period between 1985 and 1992, private practice figures ranged from 59-64%.) However, while the percentage of jobs in private practice has increased for the past 7 years and the overall number of law firm jobs has been up for the past 4 years, the total number of law firm jobs taken by the Class of 2021 is still down by more than 2,500 jobs when compared to the Class of 2007.

Starting with the Class of 2010 there was a sharp reversal, with jobs in small firms outnumbering those in firms of more than 100 lawyers for the first time since 1997. The difference grew wider with the Class of 2011 before beginning to decline. By 2016, the two categories accounted for close to equal percentages. However, 2017 marked another large shift, as the percentage of jobs in the smallest and largest firms approached their 2009 levels and this trend continued through the Class of 2021, with the percentage of jobs in the largest firms now even exceeding those pre-Great Recession levels. Nonetheless, it remains the case that law firm jobs are concentrated within the smallest and largest firm sizes and the proportion of jobs in either very small or large firms has accounted for at least 70% of law firm jobs since 2000. Finally, the percentage of law firm jobs reported as solo practice — that is, graduates who started their own solo practice after law school — has decreased considerably since 2011 and the percentage for the Class of 2021 (1.2%) is the lowest on record.

Note: Overall employment rates for 1990-1998 are based on all graduates for whom employment status was known, excluding a small number known to be employed but for whom basic job type was not known. Overall rates for all other years include such graduates, and thus may not necessarily be obtained by adding up figures for individual job types. Also, in 1985 and 1986, multiple jobs held by one person were reported separately; hence legal and other employment percentages for these years reflect positions taken rather than individuals, and cannot be added to obtain the overall employment rate. The percentage not working includes graduates seeking employment as well as those neither working in any capacity nor actively seeking a job. Starting in 2011, the figure includes graduates who had accepted an offer of employment but had not started the job as of February 15 (class years 2011-2013) and March 15 (class years since 2014). New job classifications effective with the Class of 2001 preclude direct comparisons of job types with prior years.
Source: NALP's Employment Report & Salary Survey/Jobs & JDs, Classes of 1985-2021 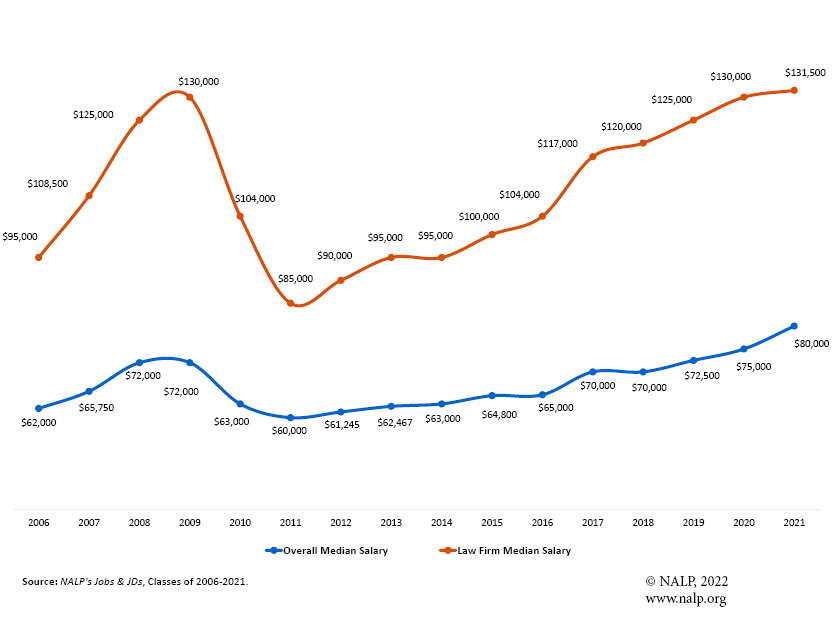 Note: Figures for 1989 and 1990 reflect only full-time law firm jobs; for all other years, figures reflect all law firm jobs acquired by graduates. Figures in this table differ slightly from those published in national reports (Employment Report & Salary Survey/Jobs & JDs) because law firm jobs for which firm size was not reported are excluded from the base. The 1-10 category includes graduates who are working for a solo practitioner.
Source: NALP's Employment Report & Salary Survey/Jobs & JDs, Classes of 1985-2021 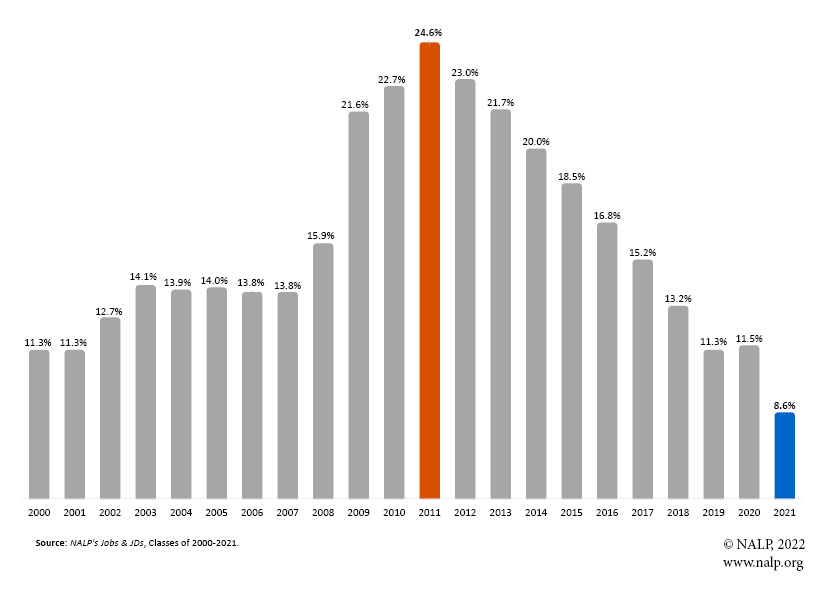