A 2018 study titled "Law Firms in Los Angeles After the Financial Crisis" from the Lowell Milliken Institute for Business and Policy at UCLA School of Law looked at Los Angeles offices of National Law Journal (NLJ) 250 law firms for the period 2007-2017. Among the findings of the report: although the Los Angeles market has been slowly recovering from the financial crisis of 2008, the total number of lawyers in 2017 remained smaller by about 5% from the 2008 peak. However, the report notes a distinction between "major Los Angeles firms," i.e., nine major firms that were founded in Los Angeles; offices of "non-local firms" that were in Los Angeles prior to 2007; and offices of "non-local firms'" that have opened in Los Angeles since 2007. The numbers in the first two groups have declined and are about 20% lower than their pre-recession highs, whereas numbers for the third group have increased, thus providing an offset.

The report also looked at home offices of major firms in five other markets: Atlanta, Chicago, New York, San Francisco and Silicon Valley, and Washington, DC, and found that 2017 lawyer headcount was down in all of them compared with 2007. The report also noted that, increasingly, firms are only "large" in terms of nationwide headcount, and not so much at specific locations. In Los Angeles, for example, the average office size was 70 in 2007, but had declined to 50 by 2017.

The report, however, posed and left open the question of what its findings mean for the entry-level employment market in Los Angeles. NALP's graduate employment data can help answer this question. Although we can't distinguish if a law firm job is taken at a home office of a major firm, at a long-established branch office, or at a newer outpost, we can track the number of law firm jobs taken in Los Angeles over the period, both overall and in firms of 251 or more lawyers, with the latter group serving as a proxy for NLJ 250 firms. We can also compare those numbers with those of the five other major markets that the UCLA study examined.

Figures for all six cities are presented in Tables 1 and 2 and depicted graphically in Figures 1 and 2. Note that in the text below the terms "large" or "largest" are used to refer to firms of 251 or more lawyers.

What do these numbers tell us? Key findings include: 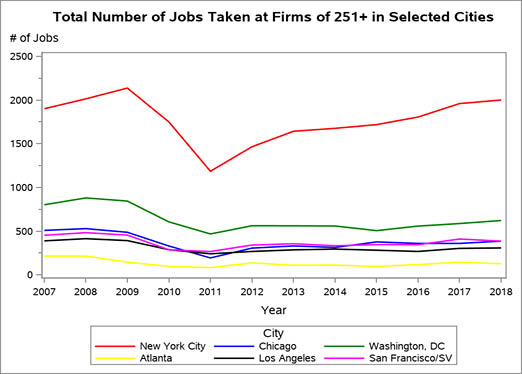 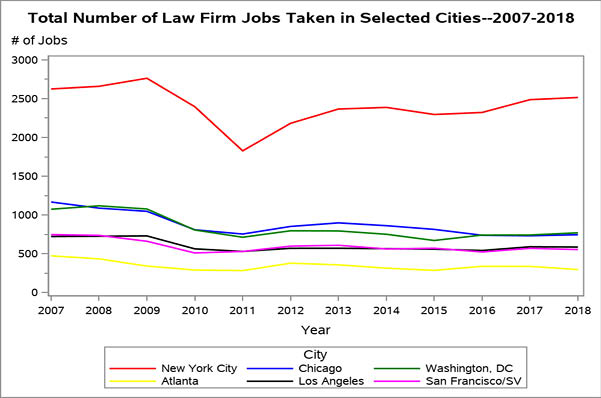