The National Association for Law Placement (NALP) today released Employment for the Class of 2015 – Selected Findings, a summary of key findings from its upcoming annual Jobs & JDs: Employment and Salaries of New Law School Graduates — Class of 2015 report, coming out in October 2016. Despite a drop in the number of jobs and the graduating class size, this year’s Selected Findings describe a flat employment rate of 86.7%, the same as was measured for the Class of 2014.

“It makes sense that a smaller group of law school graduates secured a smaller number of jobs,” said James Leipold, NALP’s executive director, “but I was surprised to see that the private practice number was so low. You have to go back to 1996 to find a comparably small number of private practice jobs.” Why the shrinking number of jobs? Leipold offered one explanation. “Most jobs are not earmarked for new law school graduates, and graduates will continue to compete with other junior lawyers for most jobs other than entry-level associate positions at large law firms, some judicial clerkships, and some government honors programs. In the law firm environment, for law firms of every size, growing efficiencies created by technology and business systems and increased competition from non-traditional legal services providers will both likely continue to put downward pressure on overall law firm lawyer headcount in the coming years and even decades.” 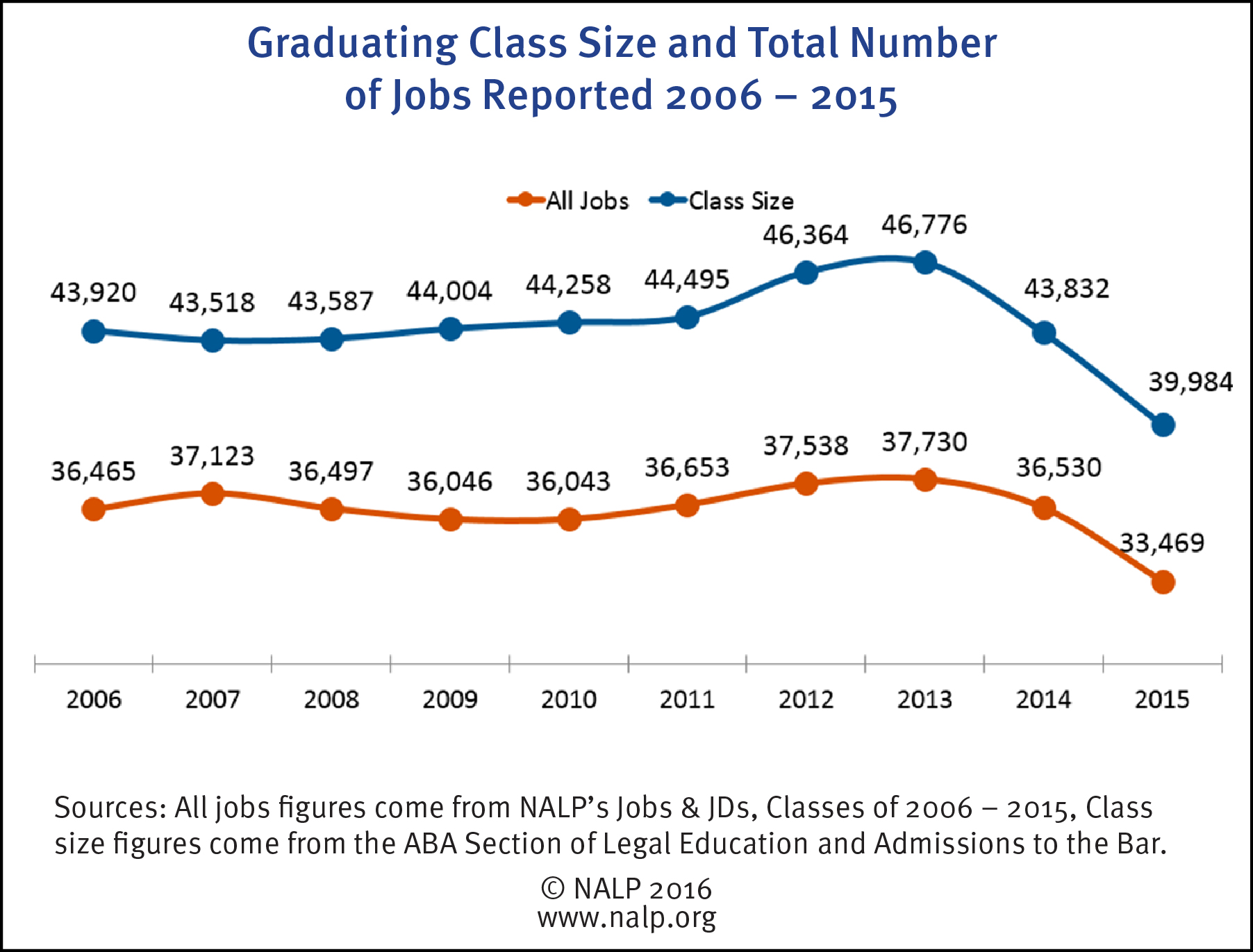 Of employed graduates from the Class of 2015, 51.3% found jobs in private practice – this compares with 56.2% for the Class of 2008, and contrasts sharply with figures of 55-58% regularly measured in the 40 years prior to the recession, but stands as an improvement over the 49.5% measured for the Class of 2011. The public sector continues to be a solid source of jobs for law school graduates, with jobs in government, as judicial clerks, in public interest organizations, and with the military all serving as steady sources of work, and collectively employing just under 30% of the graduates who obtained jobs. Employment in jobs in business fell slightly for this class, from 18% to 17.2%.

Additionally, this year’s data show that most employed graduates continue to be in positions that use their law degree in some way. Of employed graduates, 76.8% obtained jobs for which bar passage was required and 16.7% had JD advantage (law-related) positions.

After being completely flat for two years, mean and median starting salaries for the Class of 2015 did see some modest growth. The overall median starting salary grew by almost three percent, from $63,000 to $64,800, and the median law firm starting salary grew by five percent, from $95,000 to $100,000. It is important to note that this salary growth was measured well before the recent run-up of starting salaries to $180,000 for entry-level associates at the largest firms, and it is therefore all but certain that for the Class of 2016 the means and medians will jump again, and likely by a larger percentage. Moreover, while aggregate salaries have come up somewhat from the lowest post-recession figures measured in 2011, the earning power of the class as a whole is still well below what it was in 2009 when the law firm median starting salary stood at $130,000, the highest figure ever measured. The main reason for this is that despite the recent growth in recruiting by large law firms, the number of entry-level associate positions at large law firms still remains well below what it was in 2011.

Also of note, law school-funded jobs for the Class of 2015 were down more than 35% from the previous year following the ABA decision to reclassify how these jobs are recorded and counted, and are down 45% from two years ago.

“The overall jobs profile for the Class of 2015 has improved considerably from that for the Class of 2011, the class that faced the worst overall post-recession job market,” concluded Leipold. “Nonetheless, in this flat jobs market there is no evidence that the entry-level legal job market will continue to improve, or at least there can be little confidence that it will return to what it was before the recession. Certainly the members of the smaller graduating classes expected over the next few years will face somewhat less competition amongst themselves for the jobs that do exist, but the ongoing changes facing the industry make it all but certain that the job market will continue to change for new law school graduates in the years ahead.”

NALP is an association of over 2,500 legal career professionals who advise law students, lawyers, law offices, and law schools in North America and beyond. What brings NALP members together is a common belief in three fundamental things. First, all law students and lawyers should benefit from a fair and ethical hiring process. Second, law students and lawyers are more successful when supported by professional development and legal career professionals. Third, a diverse and inclusive legal profession best serves clients and our communities. That’s why NALP members work together every day to collect and publish accurate legal employment data and information, and champion education and standards for recruiting, professional and career development, and diversity and inclusion. For more than 40 years, NALP has played an essential role in the success of our members and the lawyers and law students they serve.