Since the mid-1990s, the percentage of employed law school graduates taking jobs in business and industry has increased from 12% to 18%, with half of that increase coming since 2011, when the percentage jumped up to 18.1% (from 15.1% in 2010), a level that has been largely sustained since. In terms of the number of jobs, it has doubled. As the bar chart accompanying this article shows, the percentage of jobs in business and industry climbed steadily until 1997, then dropped somewhat in the next few years through 2002 before beginning a pattern of mostly sustained growth since that time, with a few exceptions.

It should be noted that both the number of graduates and the percentage for whom employment status was known has increased in the past 20 years. However, the broad contours of the trend remain, and it is clear that the trend line is up as shown by the additional chart on the number of jobs reported in business and industry from 1994-2014. And, in fact, taking the figures back to 1992 shows that the number of jobs has almost tripled, and the percentage of jobs in business has doubled. For an earlier version of this column, see the November 2013 NALP Bulletin research column posted at www.nalp.org/1113research.

Over the past two decades the kinds of employers tracked within business have changed somewhat, precluding comprehensive trends for all. For those employer types that have been tracked consistently, banking and finance has experienced the greatest net growth over the period. Among more recently tracked categories, jobs in technology/e-commerce companies have increased steadily, while the number of jobs in legal temp agencies has fluctuated considerably and fell to its lowest point by far in 2014. (See the table accompanying this article.)

NALP has tracked the kinds of jobs taken in business (regardless of business employer type) since 2001. Again a catchall category of "other" has dominated, but opportunities in management, consulting, and marketing have grown, providing over 1,400 jobs to the Class of 2014. The number of in-house legal jobs has doubled, from about 500 to over 1,000. Starting with the Class of 2014, compliance jobs were tracked; with over 600 such jobs reported, compliance was the next largest specific job type reported after in-house legal. 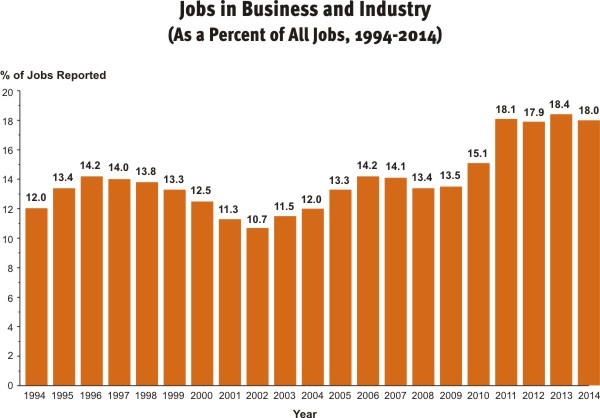 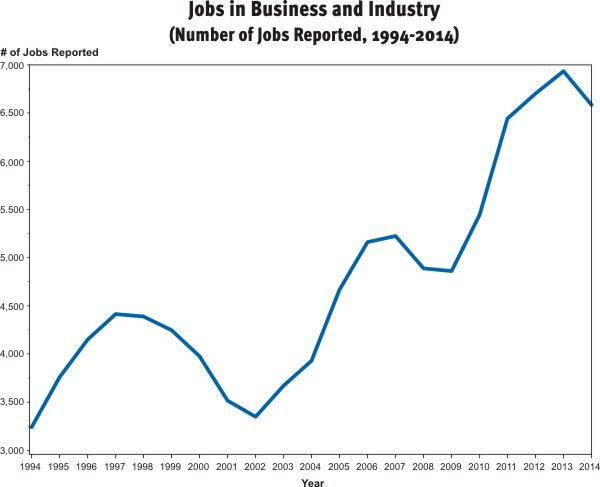