Since 2006 NALP has published a graphic illustration of the distribution of starting salaries for new law school graduates, a dramatic bimodal curve illustrating that salaries cluster at either side of the average, and that relatively few salaries are near the average. This year’s curve (below) continues this pattern. Because the distribution of jobs across the various sectors and firm sizes changed very little, and salaries were generally flat, the average or mean also was essentially unchanged from 2013. (See NALP’s press release on the Class of 2014.) Moreover, the bulk under the 2 peaks was stable. Jobs paying $160,000 accounted for about 17% of reported salaries, while jobs paying $40,000-65,000 — the left-hand peak — accounted for about half of reported salaries. By comparison, just five years ago, for the Class of 2009, the respective percentages were 25% and 34%, with 25% the largest proportion of $160,000 salary jobs recorded for any class to date.

For a historical perspective, see the salary curves for the previous classes and also an August 2012 NALP Bulletin article, “Salaries for New Lawyers: How Did We Get Here,” that traces the origin of the bimodal curve. For a breakdown of salary curves in the six largest markets for the Class of 2014, see NALP's Salary Curve Disaggregated from the August 2016 NALP Bulletin. 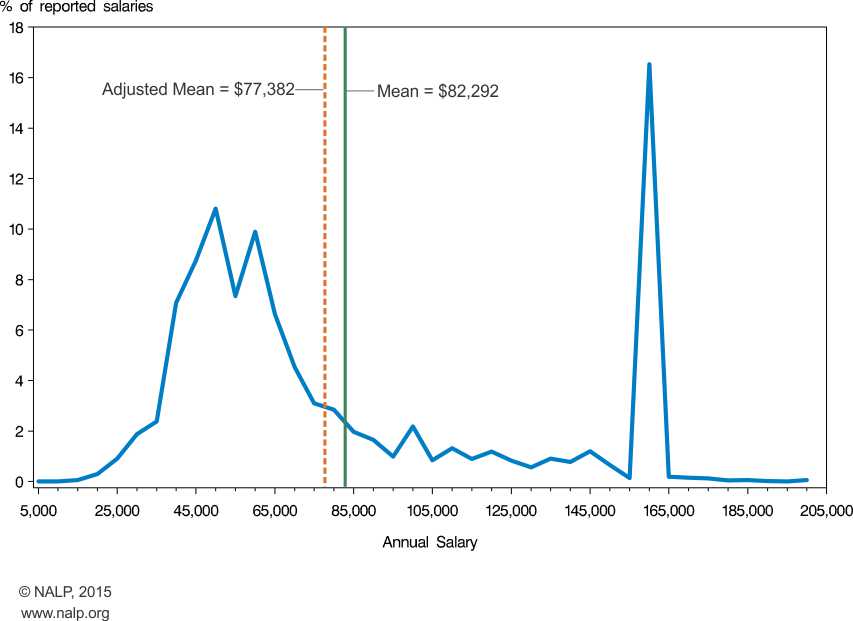 Note: Graph is based on 22,095 salaries reported for full-time jobs lasting a year or more. A few salaries above $205,000 are excluded from the graph for clarity, but not from the percentage calculations. The left-hand peaks of the graph reflect salaries of $40,000 to $65,000, which collectively accounted for about half of reported salaries. The right-hand peak shows that salaries of $160,000 accounted for about 17% of reported salaries. However, more complete salary coverage for jobs at large law firms heightens this peak and diminishes the left-hand peaks — and shows that the unadjusted mean overstates the average starting salary by just over 6%. Nonetheless, as both the arithmetic mean and the adjusted mean show, relatively few salaries are close to either mean. For purposes of this graph, all reported salaries were rounded to the nearest $5,000.